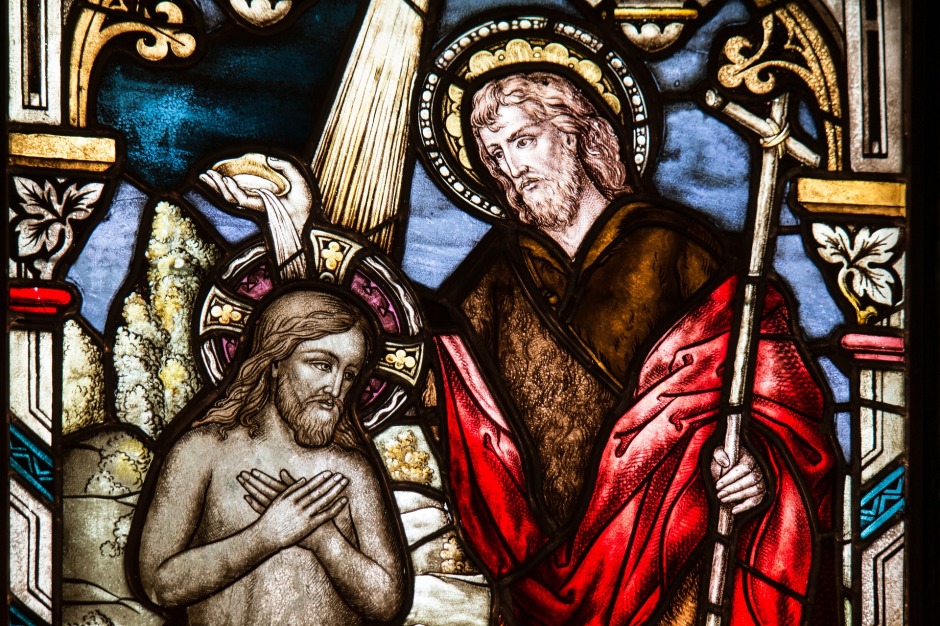 Every Advent, the prophet John the Baptist, a figure larger than life, points us directly toward Jesus. “Behold the Lamb of God,” he told his two disciples, directing them to follow after his cousin whom he had baptized in the River Jordan. “Behold the one who takes away the sins of the world. I am not worthy to loosen the strap of his sandal.”

As Elizabeth and Zechariah’s son burst upon the religious scene around AD 28 or 29, the heart of the Jewish people was stirred. This ascetic man dressed in camel hair and eating locusts and honey called the people to repentance in preparation for the coming of the Messiah. With direct and forceful words he confronted those who came to listen to him with their need to change their life and to be washed in the waters of the Jordan with the baptism of repentance.

(All the people who listened, including the tax collectors,
who were baptized with the baptism of John,
acknowledged the righteousness of God;
but the Pharisees and scholars of the law,
who were not baptized by him,
rejected the plan of God for themselves.)

John was indeed a man sent by God. He had a large following, so large, in fact, that he was seen as a threat to Herod Antipas, Tetrarch of Galilee. John the Baptist played a central and very visible role in the immediate preparation for the Messiah, as the most popular and best-known preacher of the day.

He was blessed to see what every prophet of Israel had longed to see: the face of the Messiah.

He had looked into his eyes.

He had poured the water of the Jordan over him in baptism.

He had heard the voice of the Father: “This is my beloved Son. Listen to him.”

He who had the eyes of all Israel on himself directed all who would listen to fix their eyes on Jesus. “He must increase and I must decrease.”

I tell you,
among those born of women, no one is greater than John.

With these words, Jesus spoke of his cousin with gentleness. By this time, John was no longer the center of attention. He was imprisoned. Hidden. Alone. Forgotten by many. Left aside as Jesus gathered disciples and began to preach with authority in the villages of Galilee.

He was deserted. Friendless. Languishing because of the petty political machinations of Herod. The preacher condemned the king’s marriage to his wife, Herodias as illegal, because she had previously been married to his own brother, Philip. There was nothing in his future now but death.

Despite John’s reversal in fortune, Jesus stands by the Baptist. He affirms his character, his place in salvation history, his value as a person.

Like John the Baptist, we too may experience in our life a radical reversal in popularity, influence, or fortune. We could feel imprisoned by stands we have taken, decisions we have made, or because of the power others exercise over us. What things look like to us or to others doesn’t reflect the loyalty Jesus has in our regard. As he stood by his cousin, Jesus will stand by us. Even if he is the only friend we have, he is the only Friend who in the end ultimately and forever and ever will matter.

Jesus is the one who knows our hearts.

Jesus is the one who understands what is happening to us.

Jesus is the one who cares about us always.

Jesus will always defend us.

But I am not John the Baptist, you may say.

The Baptizer washed in the Jordan River those who repented as they looked forward to the coming of the Messiah. In the sacrament of Baptism, we have received so much more. Louis Bouyer in his book Liturgical Piety describes the effects of the sacrament of Baptism as nothing short of dying and rising again. When the person to be baptized goes down into the water he or she disappears completely. When they emerge they are no longer the same person. The “dusty image of Adam” has been blotted out and now, washed from their sins, they are a new person in Christ. Christ lives in them. They are conformed now to the divine pattern revealed in Christ and now imprinted on them.

How blest are we, even if we are the least in the Kingdom of God. How blest!

As we prepare for the celebration of the birth of the Messiah, let us rejoice that Christ lives now in us, and that washed from our sins, we are a new person in Christ. This is indeed the good news!

Image by Thomas from Pixabay