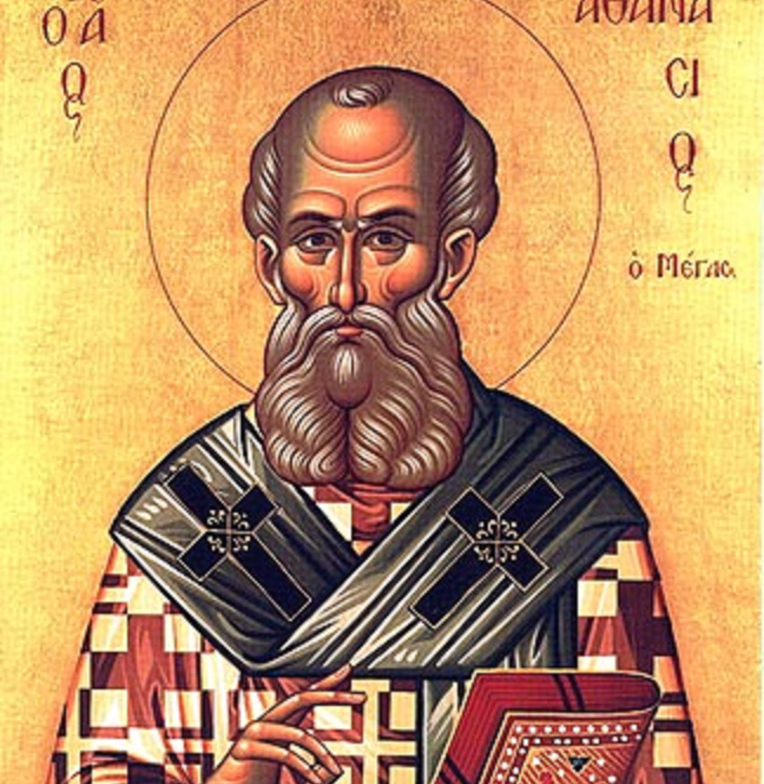 Saint Athanasius is one of the thirty-six saints who are Doctors of the Church. The Doctors of the Church are renowned for their holiness and also for their important teachings. Using the doctor metaphor, we can say that in a sense each Doctor of the Church gives us a “prescription” for spiritual growth. Saint Athanasius’ particular prescription for holiness can help us be courageous and strong in our love for Jesus in the midst of life’s challenging situations.

As a young man, Athanasius spent some time with Saint Anthony of the Desert to learn the ways of the spiritual life. That formation served him well, for Athanasius became one of the most important defenders of the Christian faith at a time when the early Church was finding a way to teach clearly about who Jesus is. Athanasius accompanied Bishop Alexander of Alexandria to the Council of Nicea in 325. The Council upheld the divinity of Jesus Christ and condemned Arianism, the false teaching that Jesus was not divine. Despite the Council’s clear teaching, Arianism spread widely, especially because it was supported by the emperors.

In 328, Athanasius became bishop of Alexandria. He constantly struggled to uphold the true teaching about Jesus Christ. Four emperors exiled Athanasius five times, for a total of seventeen years. Athanasius spent years in hiding from his enemies who wanted him dead. Even when it seemed as if Arianism could triumph in the Church, Athanasius never gave up. He wrote important theological works, including De Incarnatione, (On the Incarnation of the Word), and a biography of Saint Anthony, which helped Christian monasticism to grow. In 381, after Athanasius’ death, the Council of Constantinople reaffirmed that Jesus is fully human and fully divine.

Athanasius’ prescription: Jesus is both God and man. Put him in charge of your life!

Athanasius spent much time in exile and suffering because of his tenacity in upholding the truth about Jesus Christ: he is fully divine and fully human. In Athanasius’ day, Arianism had spread widely and had many influential supporters in both the Church and the government. At that time, the emperors often meddled in Church affairs and this imperial support for Arianism was hard to overcome. Athanasius had so much opposition in upholding the truth of the Catholic faith that he was often described as Athanasius contra mundum (Athanasius against the world.)

Why did he insist on upholding his position? Because it was the truth of the Catholic faith, not just some idea that Athanasius had. What was at stake? To deny the truth of the divinity of Jesus Christ would have meant rejecting the Catholic faith. It would have meant there was no redemption, because if Jesus was not divine his death on the cross could not have saved us. Saint Paul wrote this in regard to the resurrection:
“If there is no resurrection of the dead, then Christ has not been raised; and if Christ has not been raised, then our proclamation has been in vain and your faith has been in vain.. . .  If Christ has not been raised, your faith is futile and you are still in your sins” (1 Cor 15:13-14, 17). If Christ is not divine, then we are still in our sins. That is why the divinity of Christ is so crucial.

On a practical level, what does this mean for us?

It means that we must place Christ at the center of our lives, and believe in the teaching of the Catholic Church that Jesus is both God and man. It means growing in union with Jesus by prayer, the sacraments and good works—knowing that whatever we do to another, we do it to Jesus (see Mt. 25). It means reading the Gospel and meditating on what Jesus said and did. It means completely entrusting ourselves to him, knowing that we are in his safe hands.

Some practical things to do:

Saint Athanasius, you dedicated your whole life to preaching the true faith about Jesus Christ, that he is fully divine and fully human. Despite all the opposition you endured you clung to the truth and never stopped proclaiming it. Help us to have a deep faith and to be fully Catholic in our way of thinking despite all the errors that are so prevalent in our own time. Pray that we will have the light and courage to proclaim the truth like you did.

Patron: Theologians, those who uphold the truth of the Christian faith

A selection from Saint Athanasius

But for the searching of the Scriptures and true knowledge of them, an honorable life is needed, and a pure soul, and that virtue which is according to Christ; so that the intellect guiding its path by it, may be able to attain what it desires, and to comprehend it, in so far as it is accessible to human nature to learn concerning the Word of God. For without a pure mind and a modelling of the life after the saints, a man could not possibly comprehend the words of the saints. For just as if a man wished to see the light of the sun, he would at any rate wipe and brighten his eye, purifying himself in some sort like what he desires, so that the eye, thus becoming light, may see the light of the sun. Or it is as if a person would see a city or country, he at any rate comes to the place to see it. Thus he who would comprehend the mind of those who speak of God must needs begin by washing and cleansing his soul, by his manner of living, and approach the saints themselves by imitating their works. Then, associated with them in the conduct of a common life, he may understand also what has been revealed to them by God. Thenceforth, as closely knit to them, he may escape the peril of the sinners and their fire at the day of judgment. He will thus receive what is laid up for the saints in the kingdom of heaven, which eye has not seen, nor ear heard, neither have entered into the heart of man, whatsoever things are prepared for them that live a virtuous life, (see 1 Cor 2:9). They will then love our God and Father, in Christ Jesus our Lord: through whom and with whom be to the Father himself, with the Son himself, in the Holy Spirit, honor and might and glory for ever and ever. Amen.

From On the Incarnation, no. 57, as found here: https://www.newadvent.org/fathers/2802.htm