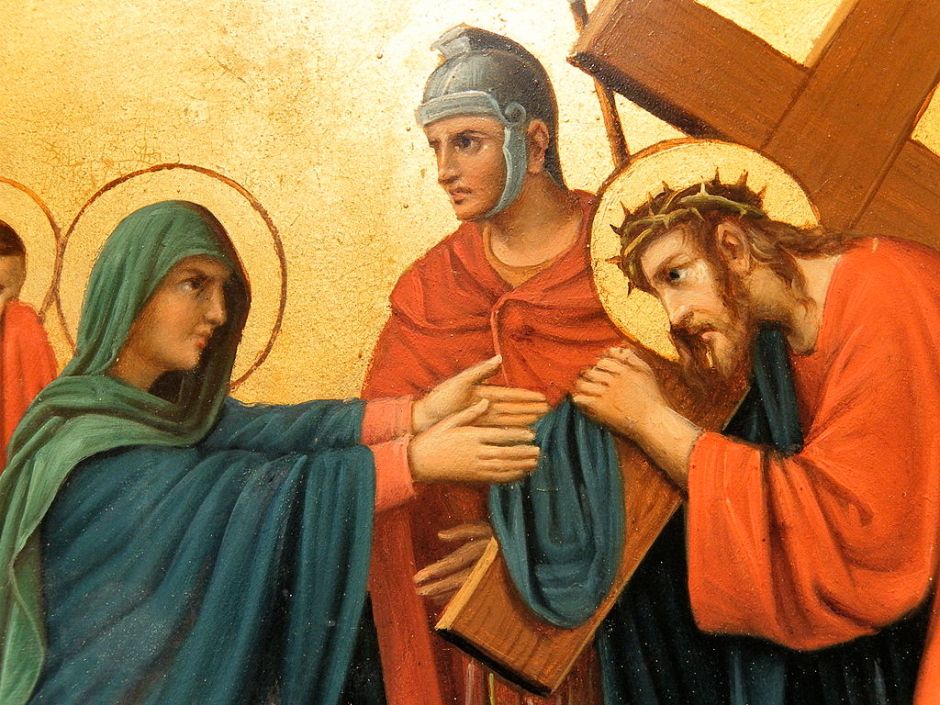 Has it ever happened to you to be deeply surprised by a prayer you have said a thousand times before but which suddenly strikes you to the heart? This happened to me last Friday as I prayed the Way of the Cross with my community. It was but two days after 17 teens had died at Marjory Stoneman Douglas High School in Parkland, Florida, and the pain of this event, born primarily by those closest to these teens and their community, still lies heavy on my heart. The sacred sorrow of this shooting, as all the other shootings that have marred the peace of soul of all of us here in the US, has been violated by the political wrangling that immediately broke out in articles, comments, and social media posts and comments.

The first station: Jesus is condemned to death.

Eagerly I bend my spirit to follow the Lord on the way to Calvary.

Did you ever notice how the Stations of the Cross are a moving portrayal of the power of love in the experience of violence?

The second station: Jesus takes up his cross. The fourth: Mary, who has followed him as mother, support, disciple, faces her Son and the look that passes from one face to another…. The fifth station: Simon of Cyrene takes up the cross of someone who may have been a stranger to him, but who–either out of duress or out of compassion–seeks to lighten this poor condemned man’s load…. The sixth station: The woman Veronica wipes the sweat, the tears, the blood from the divine face of her Master to give him at least a passing moment of comfort and pity. The eighth station: The women of Jerusalem weep at the sight of goodness treated with such violence and hatred. The eleventh and twelfth stations: Jesus extends his arms on the cross, offering his body to be nailed to the wood of the tree that would become our life, and there he dies, handing over his life for us. The thirteenth and fourteenth station: Nicodemus appears to help Mary and John care for the body of their Lord and Teacher, and together they lay him tenderly in the tomb. In silence they depart.

Where violence seems to have the last word, the only word, the tenderness of love is poured forth like oil into the wounds inflicted on the body of the Savior. Most of the Stations are about that love that rises higher than the undertone of hatred and death, soaring in delicate harmony that outlasts the other elements of the walk of death they have witnessed.

And of course, the whole thing is love. What was meant to be a humiliating triumph over this rabbi, became like a jar of exquisite perfume that when broken filled the whole earth and every time. Jesus begins by opening wide his arms in love to accept the cross, to walk this way, to allow himself meekly to obey his executioners, to die in total trust, offering himself to his Father and handing over his spirit, and at last laid in a tomb, he sleeps in the heart of the earth, searching out the First Adam and those who have gone before and wait for his salvation in the shadowed darkness in the Limbo of the Fathers.

The Roman powers, the people calling for his death, those who played the political games that seemed to ensnare this innocent rabbi, even the sin of all the world seemed to have the power. The strength of love was the real power at play.

Those who shoot, those who make the laws, those engaged in the political dance may leave us feeling powerless. But, really, are we?

Too often we are standing alongside Mary tenderly laying our dear ones to rest too soon, their lives snuffed out by the violence and insanity of another. The love of the disciples who played their part on the way to Calvary was confirmed by the resurrection of the One who said, “I have overcome the world.”

There are many ways to love–weeping, remembering, acting, advocating…. Each of them arises from the will to hope in the passing away of the storms of the world and the coming of the One who alone now gives life, promise, future, and happiness.

The Lord who had surrendered to the blows of suffering and death, still suffers at the hands of others. Caryll Houselander, an unexpected English mystic who lived through two World Wars in the first half of the twentieth century, had several visions in her life which convinced her of this. After her 9th birthday, Caryll’s parents separated. She was sent to the cloistered Convent of the Holy Child. At the school, the French and Belgian nuns taught the children how to make jams, knit woolen helmets, and hate Germans. Here, Caryll experienced her first mystical experience. One day, she noticed a Bavarian (“To us, Bavarian meant German”) nun sitting alone, cleaning shoes and weeping. After a long silence, Caryll saw a mental picture of the nun’s head weighed down by a crown of thorns. From this vision, she came to understand that Christ was suffering in this nun.

In her prayer she pleaded with the Lord that she might not be moved by pity by the Christ on the wall but be a stone to the Christ suffering around her. She asked the Lord that she might be a modern-day Veronica and wipe away the ugliness of sin from the human face. Under the sorrow, the tears, the wounds and the pain is truly the face of the Lord.

“I have said this to you, so that in me you may have peace. In the world you face persecution. But take courage; I have conquered the world!” (Jn. 16:33)

Photo Credit: Taken by Pethrus; Station of the cross, Saint Symphorian church of Pfettisheim, Bas-Rhin, France. XIXth century. Detail of the 4thstation : Jesus and his mother